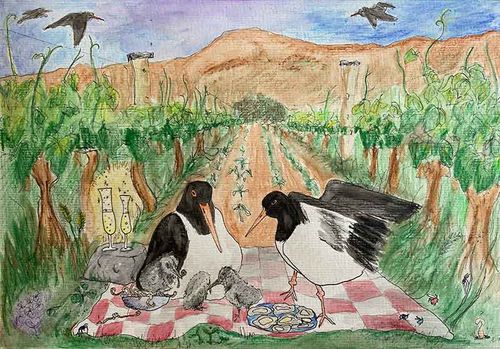 A Year in the Vineyard - November

Mother Nature has thrown down her cards: November is a month of Aces and Spades. Mostly spades, what with the homegrown seedlings being rehomed to the glasshouse, compost turned and utilized. Roses from the garden center are hastily dug into the beds so as not to be noticed on their trip from the car, especially with the last threat having quickly faded… “No More Plants!”

I think of how ‘art imitates life’ as I walk through the lazy drift of poplar fluff. Having experienced it, one then understands the root of inspiration in the atmospheric realm of ‘Stranger Things’. It is more casual than snow and more ethereal than ash, this fluff cannot be mistaken. These poor seeds in the wind are giving young people the horrors the world over!

Oystercatchers have been flitting about overhead for weeks and keeping an eye on the vineyard from between rows. Contemplating this bird that I had not spent much time thinking about, (‘There’s no oysters in Gibbston!’), I wondered what this bird was all about? Well! After some juicy research, I decide these winged marvels deserve a returned and watchful glance. The South Island Pied Oystercatcher (unromantically SIPO or romantically Torea), like many native coasters, take their summer holiday in the warm environs of Central. Flying from as far afield as Northland and as close as Otepoti Dunedin, Torea come to Central to mate and raise young. They scratch nests into braided riverbeds, lakesides and farmland in quite exposed sites and keep vigilant against intruders. These generally monogamous birds only meet back up to mate on summer holidays and spend the rest of the year eating oysters. I reckon this may sound like some acquaintances of mine. My favourite fact about my new friends the Torea, is that they have been recorded to live up to 25 years of age. This gives me new respect for the orange beaked residents here, and their longevity. Have you little Torea, lived longer than I have lived here?

Oh, and to follow up on my musings that set off this wild goose chase on oystercatchers…it turns out these winged marvels don't live off oysters alone. They love them some worms and beetle larvae when up this way.

In the vineyard, the vines have set off from the starting line. What were tiny woolly buds and single-leafed knobs 3 weeks ago have rapidly shot away into fresh shoots the length of my arm! I look out from my studio each day to ensure Deb is still there, thinning away and that she has not been swallowed up by the jungle growth! Despite my watchful eye, she wears a red and white stripey ‘Where’s Waldo top’ - trying not to be seen. It’s not going to work Deb!

Picking the way methodically through each plant, canes are being carefully chosen for both this year and next year too. The green shoots on the woody canes have to be selected to have enough space to grow and yet not get crowded. Their position has to be one where the bud sits atop the cane for strength and stability. Ones that have grown from under the cane will not grow straight, and those coming from the side will shoot off into the row and succumb to gravity eventually or the girth of a tractor pass. Next year’s options for woody canes to lay down at pruning will come from what shoots are left to grow strong on and around the ‘head’ of the vine. These have to be chosen with forethought to positioning a year from now. While vineyards rely heavily on seasonal workers, the importance of experience is valued at shoot thinning. We are also relying on Deb this year to set the vineyard up for a good crop. Having enough space and not overcrowding will help with any powdery mildew pressure. Ensuring there are a good number of healthy shoots to produce the desired amount of grape bunches is also another critical balance. She may be trying to hide in the vines, but that is because Deb is concentrating.