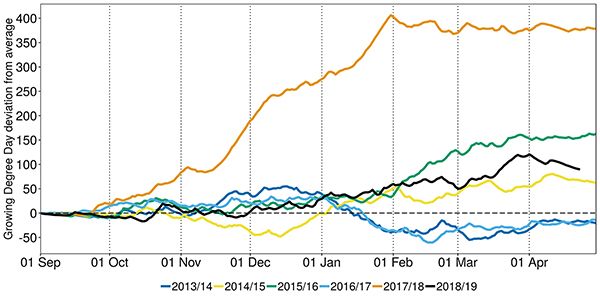 The time has come to release the 2018 Valli Pinot Noirs. The first question always asked about now is: “What was the vintage like?" Well, the 2018 vintage is best summed up by the graph included here. The graph shows growing degree days from the last five vintages as compared with the the longterm average (depicted by the grey dashed line). Growing degree days (or GDD) calculate the amount of warmth available for plant growth during a given growing season. GDD counts the total number of degrees each day above a base temperature. Temperatures below the base temperature would be too cold for growth and the plant would remain dormant until the temperature increased.

Looking at the graph, it is easy to see that 2018 was considerably warmer than average, or even the next-warmest vintage, being 2016. It was the warmest vintage I have seen in 25 vintages of winemaking in Central Otago. The vines loved it almost as much as the winemakers. Across all regions we produced fully ripe grapes and with healthy crop levels of between 5-6 tonnes per hectare (2-2.4 tonnes per acre), even the bank managers had reason to smile. The vintage characters are so obvious in the wines it gives us the feeling that possibly once in a while we actually know what we are doing. The warmer summer meant lower acids and riper, finer tannins. The wines are much more approachable when young than many previous vintages have been.

We have really enjoyed tasting and comparing the 2018 and 2017 vintages with visitors recently, as you perhaps couldn’t get two more different vintages. The cool, very low cropped, tight, concentrated wine from 2017 that will peak in about 20 years versus the 2018 vintage which is ripe, transparent, already downright delicious, with a life expectancy of about 10-15 years.

Personally I am really loving this stage in our history and to where the evolution in Otago winemaking has brought us. For the early years, the vintage was much less significant as we were improving our knowledge of viticulture, improving our winemaking techniques, and focusing on understanding what each Otago subregion offered. To some degree, those factors obscured the vintage characters back then. Now that we have those things pretty much sorted, Central Otago is like the world's great winegrowing regions: all about the vintage.