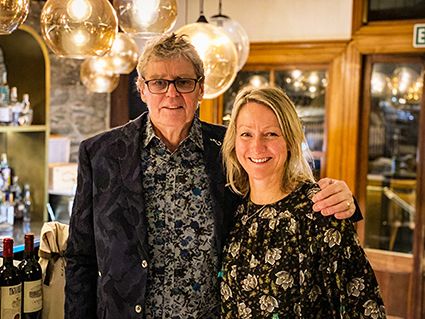 Our Collaboration with Burn Cottage Vineyard: How a penchant for pioneering led to two limited-edition Pinot Noirs.

As we release our fifth collaboration wine with Burn Cottage Vineyard, I'd like to share with you how "The Great Grape Swap" came to be. Burn Cottage Winemaker Claire Mulholland and I made wine together at Gibbston Valley Wines through the late '90s, where we not only made wines for Gibbston Valley with grapes grown around the winery, but also for a number of the region's new wineries just starting up with grapes from their vineyards spread all across Central Otago.

We were the first to see wines from these new sites within new subregions and I don’t think you necessarily have to be a winemaker to understand how much pleasure we got from being the very first people ever to see how these various places expressed themselves through Pinot Noir. The idea that Central Otago is a number of different subregions producing different styles of Pinot Noir is something that became deeply embedded in us both from very early on.

Claire left Gibbston Valley to step into the biggest pair of Pinot Noir-making shoes in New Zealand when she replaced Larry McKenna as the winemaker at Martinborough vineyards. I left GV to focus on Valli, making single-vineyard Pinot Noirs from different subregions, sharing with anyone interested what Claire and I had learnt. After all, it wasn’t being done and it needed to be done.

Fortunately for the region, Claire returned to become the winemaker for a new winery, Burn Cottage, having lost none of her enthusiasm for Central Otago in the years she was gone. Leading up to the 2014 vintage, we were having a discussion about subregions and then an idea that just seemed to appear all by itself was to make a swap, to exchange just a small amount of grapes between 1 and 2 Tonnes. The idea of working with Claire again was very appealing, as was having fruit from Lowburn or at least the part of Lowburn where Burn Cottage's vineyards are.

I think Claire will agree that when we were making wines at Gibbston Valley one of our very favourite sites was Packspur Vineyards just a km or so further along Burn Cottage Road. I have always liked fruit from that part of Lowburn. It’s on the western side of the Cromwell basin, up against the base of the Pisa Range. It loses the sun earlier than much of the Cromwell basin, so the grapes don’t bake in the late afternoon, the wines are never overripe, they keep their acidity and are more savoury in nature, not just a simple fruit flavour. They are the more elegant style of Pinot I gravitate towards.

Anyway, an exchange was made for the 2014 vintage, and we have done it every year since, well until this past vintage, 2020, when the restraints around Covid-19 made it logistically impossible.

Looking back, the most important thing has been working with another Central Otago winery with pretty much an identical philosophy which doesn’t happen as often as you would think. That philosophy is to make the very best wine possible from each site allowing the site to express itself, and then to present wines that in price express only their cost of production, not some ego-driven marketing hype.

These wines are supremely limited and sell out within a matter of weeks (days?) upon release, so if you are interested in getting your name on the allocation list to ensure you get some, email hollis@valliwine.com.