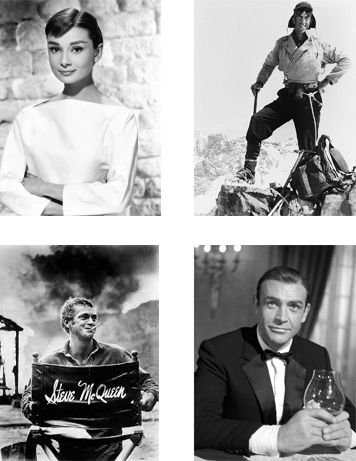 We spend so much time thinking about our wines that they almost feel like part of the family. Although our family isn’t quite this famous, I use analogies of universal figures in history to describe our wines. If we threw up a photo of Aunty Alice the majority of you wouldn't know what we were talking about.

Our Gibbston Vineyard Pinot Noir is like Audrey Hepburn – timeless, complex, generous and full of grace.

Theatre, film, musicals, fashion - Audrey was a master of the arts and was admired by all who knew her. However she was also innately shy, suffered from depression since childhood, and longed for the simple domestic life which was at odds with her fame. She loved animals and believed laughter could cure a multitude of ills, and above all and she was known to have an incredible desire to love and a passionate need to give it.

She spent the last chapter of her life as a special Ambassador for UNICEF, helping children that suffered from hunger and the results of war. She was awarded the highest civilian honour in the United States – the Presidential Medal of Freedom.

She was as complex as she was talented and the whole world worshipped her beauty. Superficial beauty fades but Audrey’s star will never dim as it is her intrinsic beauty that makes her so enduring.

Our Waitaki Pinot Noir is like Steve McQueen - dynamic, ethereal and resilient.

Born in 1930, McQueen’s early life was full of challenge and he struggled with authority. Abandoned by his father and on and off by his mother, McQueen lived a life of contrasts right from the start. From a juvenile delinquent, gangster, circus and brothel worker to a decorated Marine (he saved the life of five other Marines on an exercise in the arctic).

He was also the highest-paid actor in his era and was highly sought after and admired by the likes of Sinatra and Warner Brothers – plus he was a stunt driver, a pilot, a martial arts student (pallbearer at Bruce Lee’s funeral), and a fearless motorcycle racer.

I first discovered Steve McQueen circa 2002 when I saw a photo exhibition in London of him on his many motorcycles. The look in his eye in every photo was mesmerising as if he truly knew who he was and where he wanted to be. I left keen to discover every McQueen movie I could find (Great Escape, Bullitt and Papillon are among my favourites).

Many would say McQueen is more famous for his contribution to motorcycling, changing its image from gangster to cool. He was posthumously inducted into the Motorcycle Hall of Fame in 1999.

McQueen was generous and remembered those less fortunate. He had an unusual reputation for demanding supplies in bulk from the movies studios (razors, jeans, etc.) which he would take to the CA Boy’s Republic Home he lived in when he was a troubled teenager. He visited regularly to talk to the boys, play pool, share stories and maintained a lifelong relationship. A segue from our first wine - McQueen turned down the lead role in Breakfast at Tiffany’s (featuring Audrey Hepburn).

Watching Steve McQueen on the big screen or riding a dirt bike, you would never suspect that he was a dyslexic and partially deaf man who was beaten by his stepfathers and spent a stint living on the streets. He was as wild as he was disciplined and the story of his short life flows like a blockbuster movie script.

With his unrivalled resilience and ethereal nature, it is no wonder he became known as the “King of Cool.”

The character, British Secret Service agent 007 was created by Ian Fleming in 1953 and featured in twelve novels and two collections of short stories. After Fleming died, eight other authors have written authorised Bond novels. Seven actors have played Fleming’s James Bond, (and three “vineyard protagonists” have starred in this Valli wine), starting with Sean Connery who really brought the character to life on the big screen.

Connery described Bond as a complete sensualist – a spy with his senses highly tuned and awake to everything. This silky/sensuality is also a hallmark of wines from this Otago subregion. Connery also noted that Bond thrived on conflict and challenge, just as the level of complexity in this Valli wine has increased as we have embraced taking risks.

Fleming, the “cultivator” of Bond was originally appalled at the selection of the uncouth 31 year old Scottish actor, believing he lacked the finesse and elegance to play 007 – however, eventually he recognised the merits of his physical prowess and sexual magnetism and was converted. Connery believed Bond’s character had one defect in that he lacked a sense of humour (it is no secret that Fleming intended Bond to be boring and someone that things happened to). The producers allowed Connery to play a cheeky 007 and the movie version of James Bond was born. His tongue-in-cheek portrayal makes people laugh and while they are laughing, they are also taking him very seriously.

All the other 007 actors, in particular Roger Moore and Timothy Dalton (the Shakespearean-trained actor who most closely resembled Flemings version of the Secret Service agent), had their own interpretation of James Bond that enhanced Connery’s foundation and continued to keep 007 as one of the most instantly recognisable characters in the movie world. There was even an Aussie, one hit wonder - George Lazenby in 1969. In 2003, James Bond was named the 3rd Greatest Hero in Cinema by the American Film Institute. A segue from the last two wines: Sean Connery and Audrey Hepburn stared together in the 1976 film Robin and Marian and Steve McQueen was going to star in the film based on Fleming’s non-fiction novel Diamond Smugglers (a real world counterpart to James Bond in Diamonds are Forever) but the project never took wings.

We humans need to escape now and again with a reliable source of entertainment and laughter portrayed in a way that makes us forget about “real’ life for a while. Internationally recognisable for his suavity, toughness, wit, creativity and charm – James Bond, the character itself supersedes all the actors that portrayed him. He was known to favour Champagne Bollinger or a vodka martini “shaken not stirred,” but I’m sure he would also revel in a glass of silky, complex, fragrant Central Otago Pinot Noir.

Last but not least, our Bendigo Pinot Noir is Sir Edmund Hillary.

Sir Edmund Percival Hillary born in 1919, was an inspirational New Zealand mountaineer, explorer and philanthropist. He is most famous for being the first to summit Mount Everest with Tenzing Norgay, famously remarking “we knocked the bastard off!”

As a youth in South Auckland, he was smaller than his peers and didn’t enjoy school or sport which is quite a contrast to the confident, adventurous man he became. At age 16 on a school trip to Mt. Ruapehu, he showed more interest in tramping than studying, eventually leaving formal education in 1938 to become a beekeeper in summer and mountaineer in winter.

At age 19, his family joined the School of Radiant Living which taught a holistic philosophy of physical, psychological and spiritual health that had a profound effect on the young man. His test lecture concluded with the prophetic declaration “ Nothing can prevent us from reaching our desired goal.”

His first major climb in the Southern Alps was in 1939 with Aoraki/Mt Cook following in 1948, shortly before joining a British reconnaissance expedition to Everest in 1951 which led to a failed attempt to climb Cho Oyo. The expedition leader described Hillary as “exceptionally strong and abounding in restless energy possessed of a thrusting mind which swept away all unproven obstacles.”

At 11:30am on 28/5/1953, he became the first person to set foot on the tallest mountain in the world and subsequently the first to also reach both the South and North Poles. He has a long list of distinguished honours including Knighthood in 1953, the Order of New Zealand in 1987 and an honorary citizenship by the Nepalese government.

Since 1992 his distinctive portrait has featured on the NZ $5 note-making him the only living person not a current head of state to appear on an NZ banknote. He insisted that Aoraki/Mt Cook be used as a backdrop (not Everest).

He dedicated decades to philanthropy including assisting the Sherpa people of Nepal through his Himalayan Trust and introducing young New Zealanders to the outdoors through his favourite NZ charity the Sir Edmund Hillary Outdoor Pursuit Centre.

Sir Edmund Hillary’s towering stature and chiselled features – “a hatchet thin face that seemed tied together with steel” are symbolic of the determination and “let’s give it a go” attitude that exemplifies the Kiwi way.

From humble beginnings to international fame, he was genuine, relentless and incredibly compassionate. The final Valli wine is also determined and generous with a grand stature and chiselled features. I find it as the most recognisable Kiwi of the bunch with its exuberant fruit, underlying confidence and adventurous spirit. Our youngest wine has a charming naivety and an abounding sense of self with energy and determination to confront unproven obstacles.