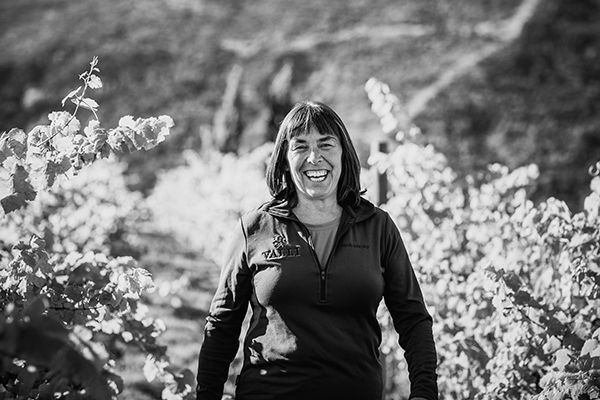 Petra is originally from Munich/ Bavaria - not wine, but beer country. She worked for 10 years in the Tourism industry in Munich before leaving Germany in 1989 to go on her OE (kiwi slang for "Overseas Experience") for one year. After visiting India and Nepal, she arrived in New Zealand were she cycled and tramped her way from Auckland down to Milford Sound. On her way back up the South Island, she met Steve, from Oregon, and both decided to stay in New Zealand a little bit longer. Now 31 years later, they are still here and in the meantime have brought up four children, living in the Waitaki Valley for the last 30 years.

Petra started working in the vineyards at Grant’s Road in 2007 for a few hours a week but within a year it had developed into a full-time job. She has worked at most vineyards in the area, supervising an interesting mix of local and international workers. She has also worked at most of the local cellar doors and has even done a fair amount of bottling in the local winery. When you live in Waitaki, you 'wear many hats'!

Petra believes in the sustainable way of growing grapes to benefit the soil and vines and the people who work with them. For her, the end goal always is to produce outstanding grapes and wine with lots of character and integrity.

What she enjoys most of her work in vineyard is the challenge. Every year is different, and you always keep hoping for a perfect season, but every season is unique and perfect in its own way.